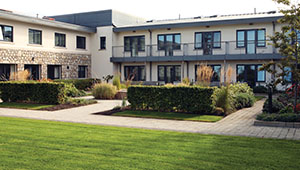 Bloomfield Mental Health Service encompasses care and support for a variety of diseases and conditions. One of our key focus areas is the care and treatment of people with Huntington’s Disease (HD) alongside support for their families. Huntington’s Disease is a rare, hereditary, degenerative disorder of the brain that was first described by George Huntington in 1872. Symptoms affect motor ability (e.g. posture, uncontrolled voluntary and involuntary movements, sustained muscular contractions, and difficulties with speech and swallowing), behaviour (e.g. anxiety, depression, irritability, outbursts of anger, OCD, sleep disturbances and, less commonly, mania and schizophrenia) and cognition (e.g. the gradual impairment of comprehension, reasoning, concentration and memory).

Bloomfield Mental Health Service is the only facility in Ireland with a high level of specialised care for those with Huntington’s. While there is currently no cure for Huntington’s Disease, there are treatments that can alleviate some of its symptoms and improve quality of life for those affected by it.

Huntington’s is known as a family disease, because every child of a HD sufferer has a 50% chance of inheriting the faulty gene that causes it. For the family of a HD patient, genetic testing is available to test for the presence of this gene.

We use cookies to ensure that we give you the best experience on our website. If you continue to use this site we will assume that you are happy with it.OkRead more